Wildrose's opposition to carbon tax contradicts its own election platform

This week, the federal government unveiled plans for a national price on carbon to reduce greenhouse gas emissions. Basically, if provinces fail to set a minimum price of $10 a tonne by 2018, Ottawa will impose the pricing scheme on the province.

But hang on a second.

Did Wildrose's 2015 platform commit it to supporting national emission standards exactly like the ones just tabled by the federal government? It certainly seems that way. 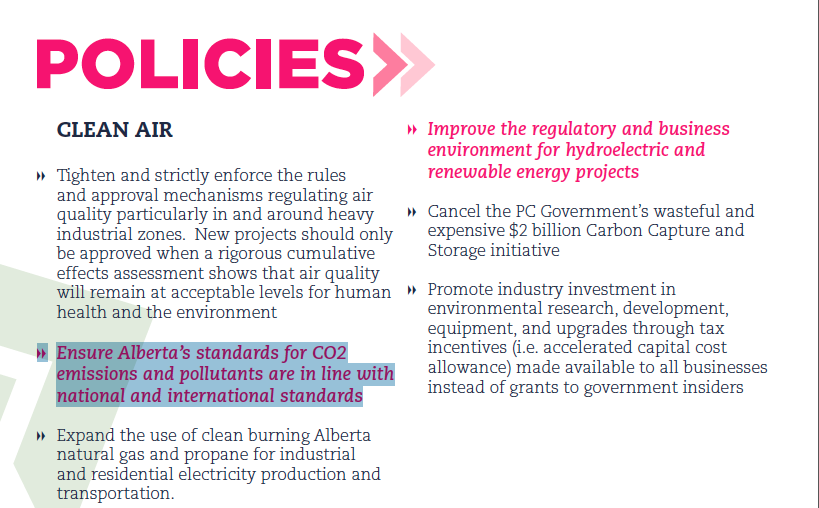 This Wildrose commitment -- to "ensure Alberta's standards for C02 emissions and pollutants are line with national and international standards" -- was even highlighted in pink, apparently to give it added prominence.

It would hardly be the first time the party or its MLAs has flip-flopped on climate policy.

Leader Brian Jean called the Notley government's own carbon plan a "tax on everything," despite voicing support for just such a policy while a federal Member of Parliament.

"In the November 2008 Speech from the Throne, the government committed to working with the provincial governments and all of our partners to develop and implement a North America-wide cap and trade system for greenhouse gases and an effective international protocol for the post-2012 period ... The cap and trade system will cover all industrial sectors and will require mandatory emissions reductions."

Hilariously, at its 2015 general meeting Wildrose considered a policy that would see the federal government impose financial penalties on any province doing anything to "discourage economic activity" or "limit responsible resource development."

Under the plan, provincial governments taking action against big polluters would find themselves hit financially by the feds in the form of reduced equalization payments -- a kind of reverse carbon tax, if you will.

If there's a consistent stance to be found in this mess, it's that Wildrose still has a long way to go before anyone takes them seriously on climate change.