Ezra Levant's Rebel Media is moving on up in the world, graduating from just an ordinary, run of the mill source of national shame for Canadians to something truly global – an international embarrassment.

For those of you who haven't been following the "anti-Semitic" antics emanating from Levant's alt-right website this week, here's a quick look back at the lowlights:

The story begins in Israel, where Levant and several Rebel Media personalities travelled to the Middle East on what was officially described as a "fact-finding mission."

But not according to Rebel Media host Gavin McInnes – as he tells the story, the whole thing was a "brainwashing trip" that "the Israeli government paid for" along with a group of "mostly Israeli" Rebel Media donors.

In a now infamous video, the Rebel Media host makes the following points:

• Rather than broadening his horizons, McInnes says the "brainwashing trip" is "having the reverse effect on me – I'm becoming anti-Semitic."

• He says he felt like "defending the super far-right Nazis" during a visit to the Holocaust museum and explores a handful of myths spread by Holocaust deniers.

• He also falsely blames "Jews" for the Holodomor (the mass-starvation of millions of Ukrainians in the 1930s under Stalin) and claims "Jewish intellectuals" helped bring about the rise of Hitler.

As you'd expect, McInnes' rambling Holocaust video was celebrated by neo-Nazis, white nationalists and other members of the so-called alt-right.

After the video began circulating on Twitter and his plane touched down in North America, Rebel Media published a frantically filmed video of McInnes attempting to walk back the comments, claiming his anti-Semitic rant was "taken out of context" (it wasn't), disavowing support from "my new Nazi friends" and also reiterating: "I like Jews."

The next day, Rebel Media doubled down and published a new video with the headline "10 things I hate about Jews."

Here are a few notable moments from that video:

• McInnes claims Jews have a problem with "alpha males, especially when they're white."

• He claims Jews have a "whiny, paranoid fear of Nazis."

• He claims Jews do not have a "good attitude" and need to get over the Holocaust.

• He compares Jewish attitudes towards the Holocaust to African-American attitudes towards slavery ("It's like a black guy going: yeah, white people did slavery. Well, they didn't start it but they ended it so maybe be a little more positive about it").

4. Rebel Media gets trounced by the media in Israel

As the week wore on, word of McInnes' ramblings finally reached the shores of Israel, with headlines appearing several prominent Israeli newspapers.

"Gavin McInnes recently came under fire after he released a video on YouTube listing the ten reasons he hates Jews ... McInnes made the video following a visit to Israel as a correspondent for Rebel Media, a Canadian political and social commentary platform that's considered to be strongly affiliated with the Canadian Right wing."

The Times of Israel took exception with "the video of an apparently drunk McInnes, wearing an undershirt" as he "stumbles down a Tel Aviv street ranting about Israel," particularly the part where the "star of Canada's Rebel Media" claims Israelis have a "whiny paranoid fear of Nazis":

"Canadian YouTube personality Gavin McInnes said that his visit [to Israel] was making him anti-Semitic, that Israelis have a 'whiny paranoid fear of Nazis', and that Jews were ultimately responsible for World War II."

Meanwhile, an article in Haaretz described the Rebel Media "correspondent" this way:

"McInnes ... is now working as a correspondent with Rebel Media, a Breitbart-like outlet that's popular among Canada's nascent far-right. The reporter has gotten into trouble before for controversial statements about transgender people and Muslims." 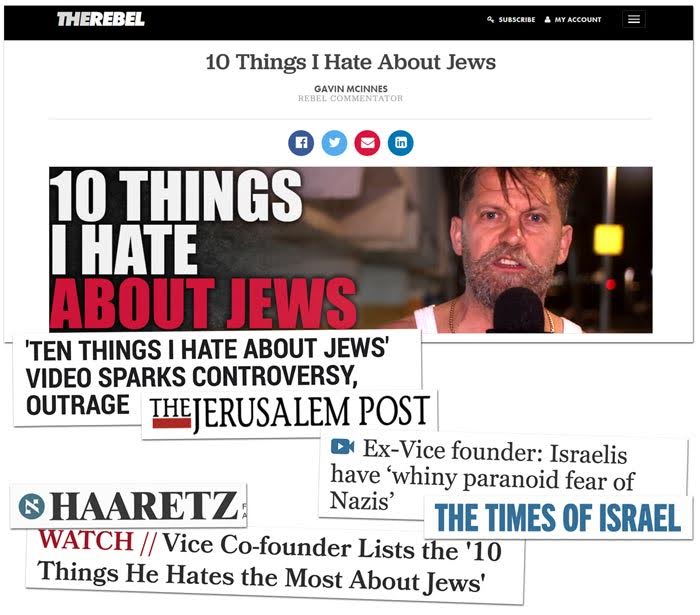 And then the story spread around the world.

Australia's News.com.au had this to say about the "bizarre blog post" from the "reporter working for Canada's version of far-right American news site Breitbart, Rebel Media":

"Armed with red eyes, a cigarette hanging out of his mouth and wearing a mesh, white singlet, Mr McInnes appears to stumble throughout the video while listing his problems with the Israeli people. Many believe McInnes is intoxicated as he rants about Israel on the street."

New York-based Salon had this to say about the "anti-Semitism" and "overtly Nazi-style tropes" that seemed to find their way into the Rebel Media host's video:

"Here’s some background: McInnes is part of The Rebel Media, a right-wing website run by Ezra Levant, who is more or less Canada’s answer to Glenn Beck. Recently, Levant and a handful of his hosts, including McInnes, went to Israel ... Avoiding all appearance of pandering to anti-Semitism would seem to be important in forging an alliance with the Israeli right. Apparently this expectation was more than McInnes could handle, because he put up a lengthy video rant on a non-Rebel feed where he minimized and made excuses for Holocaust denial and Nazism."

"For months, several Conservative leadership candidates have been cozying up to Rebel Media, attending its events, advertising on its web site and, in some cases, echoing its views." 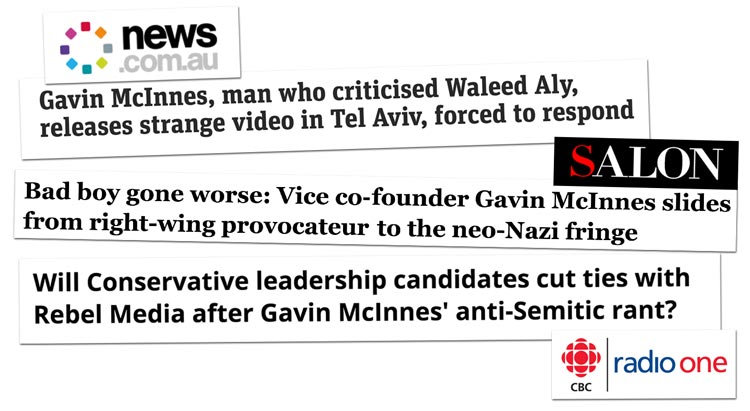 I agree with you, Michael: McInnes' statements are "repulsive and disturbing". No more Rebel Media events for me. https://t.co/gn7fbCkDQe

Better late than never. After all, Alexander criticized Alberta Premier Rachel Notley at one Rebel Media rally as Levant's supporters chanted "lock her up" and appeared at another Rebel Media rally protesting a motion condemning racism and Islamophobia.

Still, Alexander might want to explain why this was his red line?

It really is remarkable that promoting anti-Muslim conspiracy theories about the Ste-Foy massacre wasn't enough https://t.co/1x2tey6BE7

A day later, Kellie Leitch's Conservative leadership campaign told iPolitics McInnes' comments are "un-Canadian" and said McInnes "would not be allowed into the country" under Leitch's draconian immigration proposals.

However, despite the fact Rebel Media produced and published the video on their website, Leitch's campaign refused to blame Rebel Media for McInnes' video.

Please everybody ask @KellieLeitch is she condemns The Rebel for defending these comments. She want to be PM!!https://t.co/OlEH9i6QHk

Asked to explain why he does interviews with the "dangerous folks" at Rebel Media, Kenney's campaign tweeted that Kenney, an old friend of Levant's, hasn't done an interview with Rebel Media for a very, very, very long time – "7 months ago," they say:

Of course, Kenney's campaign didn't exactly rule out the possibility of future appearances on Rebel Media either.

9. Another Rebel Media host goes viral calling for a "Crusade" to "retake Bethlehem"

During a field trip to Bethlehem, Rebel Media host Faith Goldy was surprised to discover the existence of Muslims in the West Bank town.

And at one point in a video published by Rebel Media, Goldy invokes the phrase "deus vult."

As AJ+ – an online news outlet run by the Al Jazeera media network – later pointed out in a video that has been viewed by over two million people worldwide, "deus vult" is a "battle cry" from the Crusades now "used in white nationalist circles and those in the 'alt-right' movement."

This woman is offended by the call to prayer in the West Bank. pic.twitter.com/c4nZ81x2cw

Sharing the AJ+ video on her own Facebook page, Goldy even repeated her "deus vult" battle cry.

Goldy's also tweeted photos posing in "deus vult" hoodies emblazoned with the crusaders' cross alongside her former Rebel Media co-host Lauren Southern – no stranger to the alt-right herself – with the caption: "in hoc signo vinces" ("in this sign you shall conquer"). 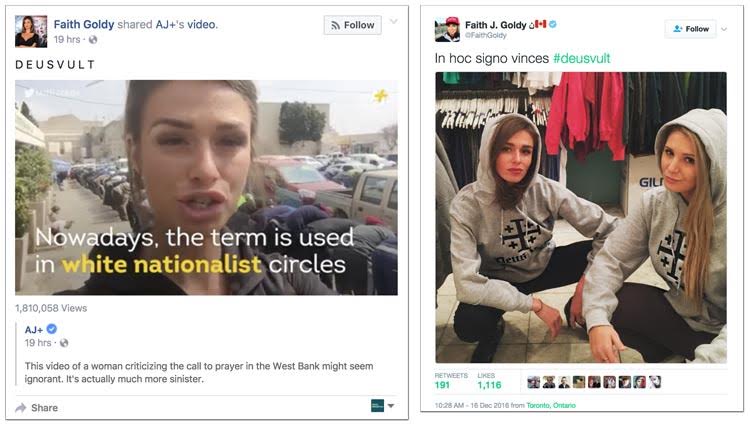 10. Then another video surfaced of three Rebel Media hosts drunkenly talking about Jews

By the end of the week, yet another video from Rebel Media's trip to Israel surfaced, showing McInnes, Goldy and Alberta bureau chief Sheila Gunn Reid surrounded by several empty bottles of wine.

Here are a few memorable quotes from that pay-walled "premium content," courtesy Canadaland:

• McInnes: "We’re supposed to be brainwashed by Kim Jong-Ezra Levant ... He wants us to love the IDF and be mad about the Holocaust and all that stuff. Um, and I think it’s had the reverse effect: if there’s one thing that I've learned when I'm here on this propaganda tour, it's that I'm mad at Jews."

• Goldy: "You know what, for the next humanitarian mission, like, instead of, like, dropping rice packs and, like, beans ... Just some, some like, just some deodorant, I think wouldn't be the worst thing ever" ("Middle Easterners reek," McInnes adds).

• Goldy: "Let’s really get to the crux of the matter, and that’s the fact that we need to launch the next Crusade and reclaim Bethlehem" ("Yeah!" McInnes and Gunn Reid exclaim). 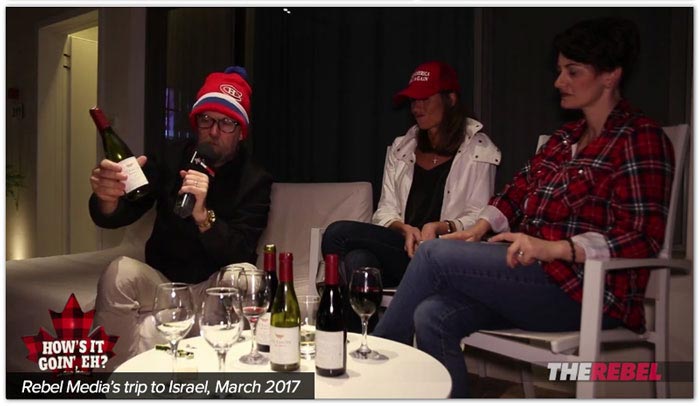