Do birds of a feather flock together?

Four Conservative leadership candidates will be going to a rally protesting a motion to condemn racism and religious discrimination organized by an alt-right website and taking place at a college run by a far-right, homophobic preacher.

Kellie Leitch, Chris Alexander, Pierre Lemieux and Brad Trost are all lined-up to speak at Rebel Media's "Freedom Rally" Wednesday night at the Canada Christian College in protest of M-103 – a non-binding motion calling on the House of Commons to condemn "systemic racism and religious discrimination" in Canada. 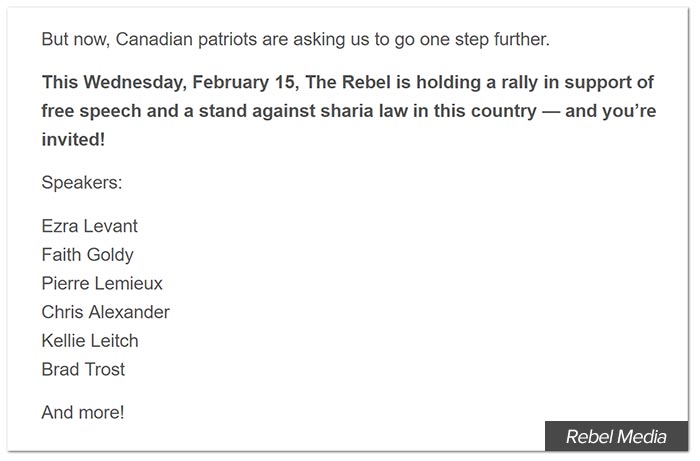 But the motion's focus on "Islamophobia" and "the increasing public climate of hate and fear" has been fodder for Internet conspiracy theories falsely claiming the government is making it illegal to criticize Muslims, a theory popularized by Ezra Levant's alt-right Rebel Media website – who are also organizing the event.

After all, the same people behind this event also spread disinformation targeting Ontario's sex-ed curriculum a few years ago, falsely claiming the curriculum is part of a "gay agenda" designed by pedophiles to sexualize and groom children.

But according to their latest theory, the non-binding motion which will not actually criminalize anything, is akin to a medieval "blasphemy law" that will "silence anyone who criticizes Islam":

"The Canadian government is preparing to silence anyone who criticizes Islam. Their anti-Islamophobia motion resembles a kind of blasphemy law in favour of one preferred religion above all others."

It's worth taking a closer look at whose rings Leitch, Alexander, Lemieux and Trost are kissing.

Rebel Media presents itself as cut from the same mould as American alt-right websites such as Steve Bannon's Breitbart and Alex Jones' conspiracy theory website Infowars: 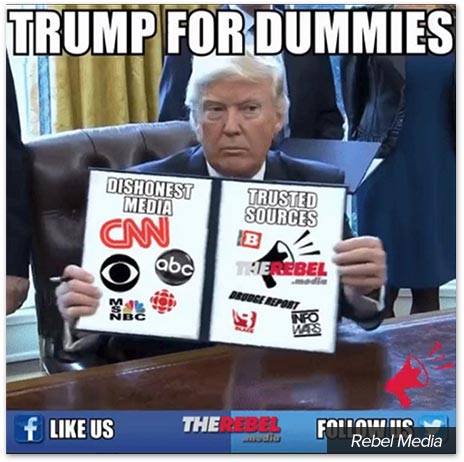 What other horses are the four Conservative leadership candidates hitching their wagons onto?

So, @KellieLeitch is at a rally organized by a website that puts out videos like this? #cdnpoli #cpcldr pic.twitter.com/HcAXH5nJJs

Rebel Media has also been known to circulate propaganda videos produced by Golden Dawn, a fascist political party based in Greece, and was widely criticized earlier this month for trying to fundraise on the Quebec City terrorist attack and suggesting police were covering-up the true identity of the terrorist after it was reported that the attacker was white.

McVety's stint as a TV host came to an abrupt end in 2010 when the Canadian Christian TV station CTS yanked the controversial preacher off the air following complaints about his program's "discriminatory comments on the basis of sexual orientation, religion and mental disability."

According to a Canadian Broadcast Standards Council ruling, McVety violated broadcasting codes by presenting "distorted facts" and "abusive comments about homosexuals," specifically comments that "suggested that homosexuals prey on children."

McVety also runs the Institute for Canadian Values, a social conservative think-tank that runs campaigns on a variety of fringe issues:

Not all Conservatives leadership candidates are hopping on the Levant and McVety's bandwagon – Michael Chong, for one, says he's voting in support of the motion:

"In light of the mass shooting at the Quebec Islamic Cultural Centre in Quebec City last month, were six Mulsims were killed and 19 injured while they prayed in their mosque, it is appropriate and important that Canadian parliamentarians study the issue of anti-Muslim and anti-Islamic prejudice and discrimination."

On the other hand, Maxime Bernier, Steven Blaney and Andrew Scheer say they also oppose the motion.

Kevin O'Leary, who will appear at a promotional event in Texas tomorrow, has called the motion "a slap in the face to other religions and to other races."

Kellie Leitch has secured the endorsements of two separate white nationalist groups, although she says she doesn't want their support and thinks her message is being misconstrued.

Conservatives will pick a new leader on May 27th.